RENAULT TRUCKS Defense designed the VAB Mark III based on the concept of the original VAB. The VAB Mark III is a 20 t 6×6 medium armored vehicle which is as rugged and reliable as its predecessor but with far superior capabilities through the use of very advanced protection and mobility technologies: increased power and payload (up to 4.7 t), larger internal volume, better tactical situational awareness, reinforced protection. The VAB Mark III is well suited for engagement and riot-control missions with the ability to transport up to 2+10 officers.

The VAB Mark III is fully qualified and industrialized. Units have been produced in various versions and options on the series assembly line in the Limoges factory.

The MIDS is specially designed for public order and internal security missions. This vehicle, which has already been sold to many countries in Europe and the Middle-East is extremely mobile, well protected and able to cross any obstacle in urban areas. It offers a high degree of armored protection in its category and can carry up to 12 officers in both urban and rural settings.

The distinctive features of the SHERPA LIGHT are all-terrain mobility and payload. It can be fitted with an assault ladder designed to support a special team during counter-terrorist, hostage rescue or police missions. The SHERPA LIGHT APC Police is a 3-door protected troop transport version for up to 10 officers with their equipment.

The mobility of the PVP APC is largely due to a weight / power ratio higher than 34 hp/t. This 5 t class protected vehicle’s compact size makes it more maneuverable than its competitors in builtup areas. It can take on challenges in conflict areas and gives ready access to narrow lanes.

Thanks to its powerful engine and automatic gearbox, it can also be used as an ATV (All-Terrain Vehicle) with good crossing capabilities.

Combining the off-road mobility of the SHERPA MEDIUM 6×6 tactical truck and a heavily protected V-shaped armored cab, the HIGUARD is ideally suited for tactical missions such as troop transport in asymmetric engagement areas. Its large internal volume and payload accommodates up to 12 officers with their equipment. 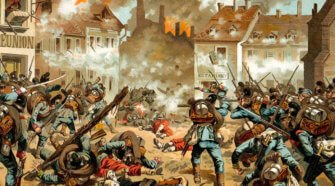